Weld pad gages are designed for attachment to ASME Code vessels. The pressure rating of the weld pad gage is calculated for a rigid installation, unaffected by loads imposed by the vessel.

Rectangular weld gages for seal reservoirs are typically made in the “2 Hole & Channel” design where the weld pad base is not fully slotted but only drilled through at top and bottom. The back of the welding pad is curved to fit the reservoir and a fillet weld is made around the perimeter of the weld pad. The shell of the vessel is drilled with two holes that correspond with the holes in the weld pad. In this design there is no need to cut an elongated opening in the shell.

Other weld pad gages for general purpose are frequently made in the “Full Slot” design to allow the operator to see directly into the vessel. These may be inserted into the vessel wall, which requires a full length opening.

When the vessel is slotted instead of only drilled with two holes the pad is subject to bending forces imposed by the vessel wall as the vessel is hydraulically loaded. These forces act in both the short and long direction of the weld pad. Every vessel behaves differently, depending on shell thickness, diameter and material. Once the glass is installed to the weld pad by means of the retainer flange and bolting it will assume the same shape as the weld pad, even with a relatively soft rubber gasket on top of the weld pad.

A cylindrical shell with a long opening undergoing pressure loading tends to distort in the short direction as hoop forces spread the opening wider in the middle. The cylinder also tends to assume a spherical shape, the long side of the cylinder becomes shorter as the mid span area bulges outward. The extreme condition would resemble a frozen can of soda, somewhat shorter in length than normal and with a larger girth in the mid section.

The ASME Code considers stresses in the shell material as a guide for design; but not deflection amplitudes. A vessel design might pass ASME allowable stress levels in the shell material. However the associated deflection of the shell can be so large that the glass will not be able conform to the changed shape of the vessel without experiencing stresses that exceed its own bending limits which are quite lower than steel. High bending stresses can cause the glass to suddenly break.

It is the vessel designer’s responsbility to make sure that the glass seating surface in the weld pad remains sufficiently stiff as the internal pressure is raised in the vessel. The glass itself should not be subject to bending beyond the limits shown in the table below.

Various means of stiffening are available including increasing the thickness or width or length of the weld pad or adding cross ties in the slotted area. The vessel itself may be designed to include internal stiffeners attached to the inside of the vessel or the welding pad may be installed using a repad. The vessel designer must insure that the sight glass mounting surface remains flat in order to avoid harmful bending stresses that can cause the glass to break.
Distortion caused by Welding
The process of attaching the weld pad gage through welding may result in significant distortion to the original flatness of the weldng pad. Minimal warpage can be achieved by keeping the temperature of the welds as low as possible. This can be accomplished by skip welding from side to side and from end to end. Installations with significant weld distortion should be remachined after welding. This may require use of large boring mills or, depending on the size of the vessel, portable machining of the gasket seat.

Flatness of the glass seating area of the welding pad should be monitored after welding and remain within the limits shown below to minimize the chance of glass breakage during installation (bolt tightening, hydrotest) or later in service.

The glass seating area should be flat within the following amounts. These limits are calculated according to the bending strength of the glass and further limited by the glass manufacturer’s maximum out of flatness recommendations :

Pressure ratings are not stamped on the RWA and TWA series weld pad gages because the weld pad gage manufacturer cannot control the degree of flatness both after welding and in the hydraulically loaded condition as the vessel is pressurized. A table of ratings is published showing the pressure capacity of the weld pad assembly assuming that the flatness limits shown above are maintained in the final welded and pressure loaded condition.

1- Provide good fit-up.
2- Use smallest size weld permitted by Code rules.
3- Use as few passes as practical.
4- Use as low heat input as practical.
5- Use full penetration groove welds, double vee, instead of fillet welds.
6- Place the welds near the neutral axis of the gage body. See sketch. 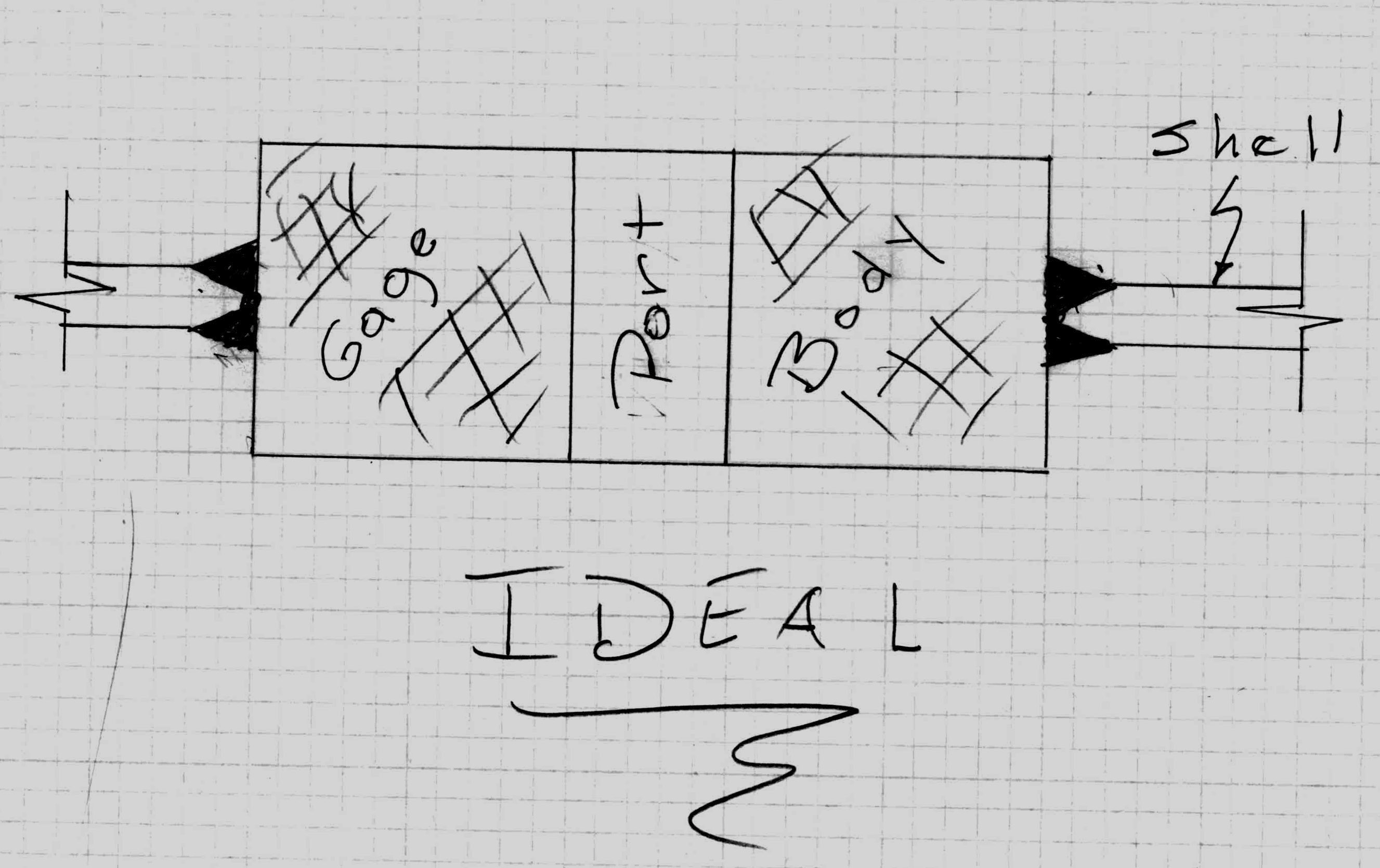 7- Balance welds about the neutral axis.
8- Weld opposing surfaces alternately immediately following each other.
9- Use intermittent back-step welding.
10- Use clamps, jigs, fixtures or stiff-backs as needed to maintain alignment.
11- Preheat as is practical.

For small diameter vessels such as 6” and 8” pipe some of the weld distortion suggestions listed above may not be practical.

More information on controlling weld distortion can be found in the following articles available on the web, written by Mr. Omer Blodgett, Senior Design Consultant with the Lincoln Electric Company and published in Welding Magazine / Welding Design & Fabrication